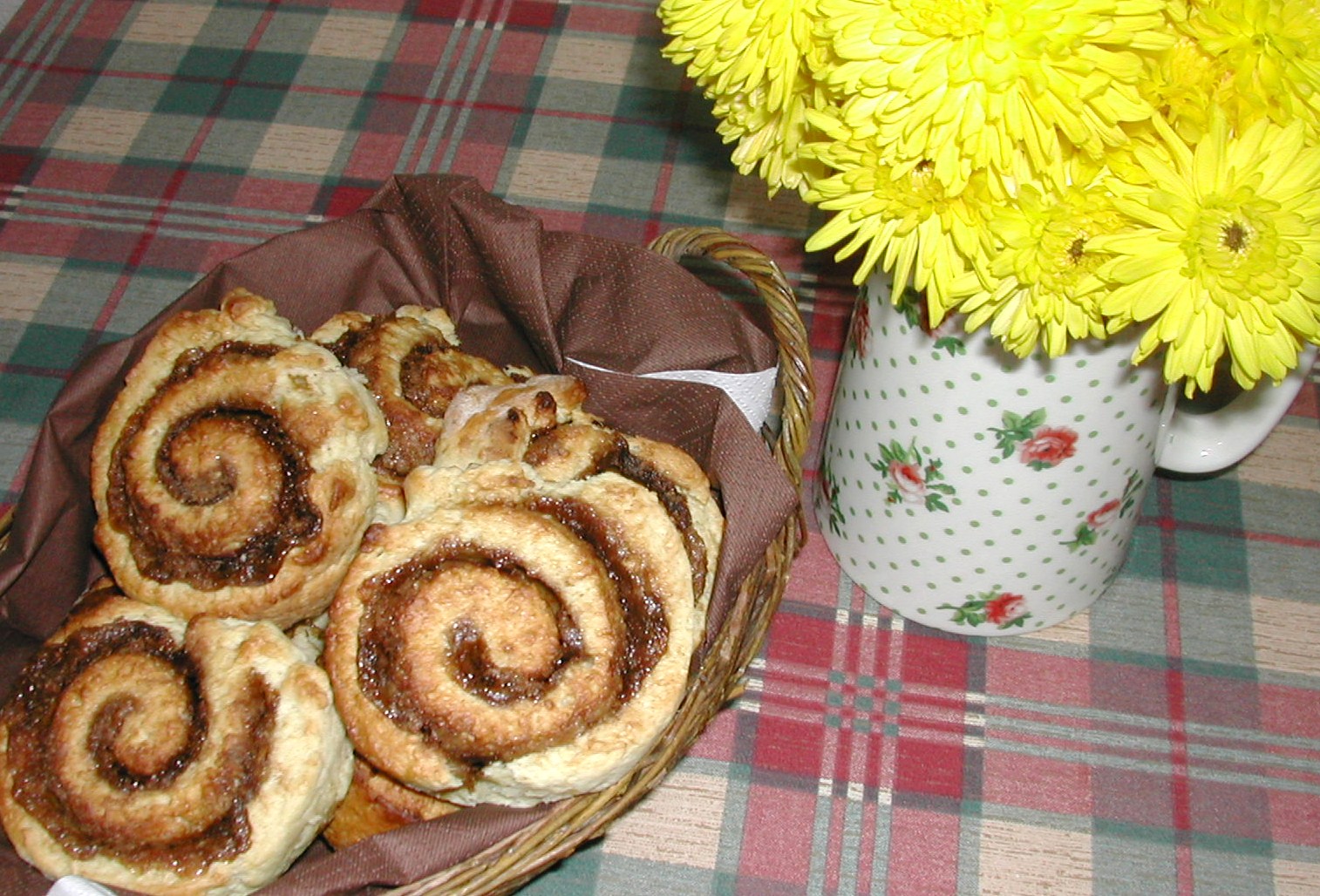 A little restaurant we go to for lunch occasionally, produces award-winning cinnamon scones. The recipe is a closely guarded secret and under no circumstances is anyone ever going to find out how they make them.
I have had them so many times and they are absolutely delicious! However each time I have one it’s like I’m performing an autopsy on the poor scone so determined am I to discover how they’re made.
Now I have tried making them many different ways never getting them quite right. Now they’re just scones so there can’t be too many variations on how to do it.
Well this time I think I have come very close to the ‘real’ thing and unlike the restaurant I’m going to share my recipe with you!

I use a food processor to make my scone mix as I think the less you handle it the better and the food processor makes it so quickly.
So put your flour, salt and butter in the processor and give it a whizz until it resembles fine breadcrumbs, or it you prefer rub the butter into the flour and salt by hand. Then add the caster sugar and give it another whizz to mix it through, next you add enough milk to produce a soft but not too sticky dough. 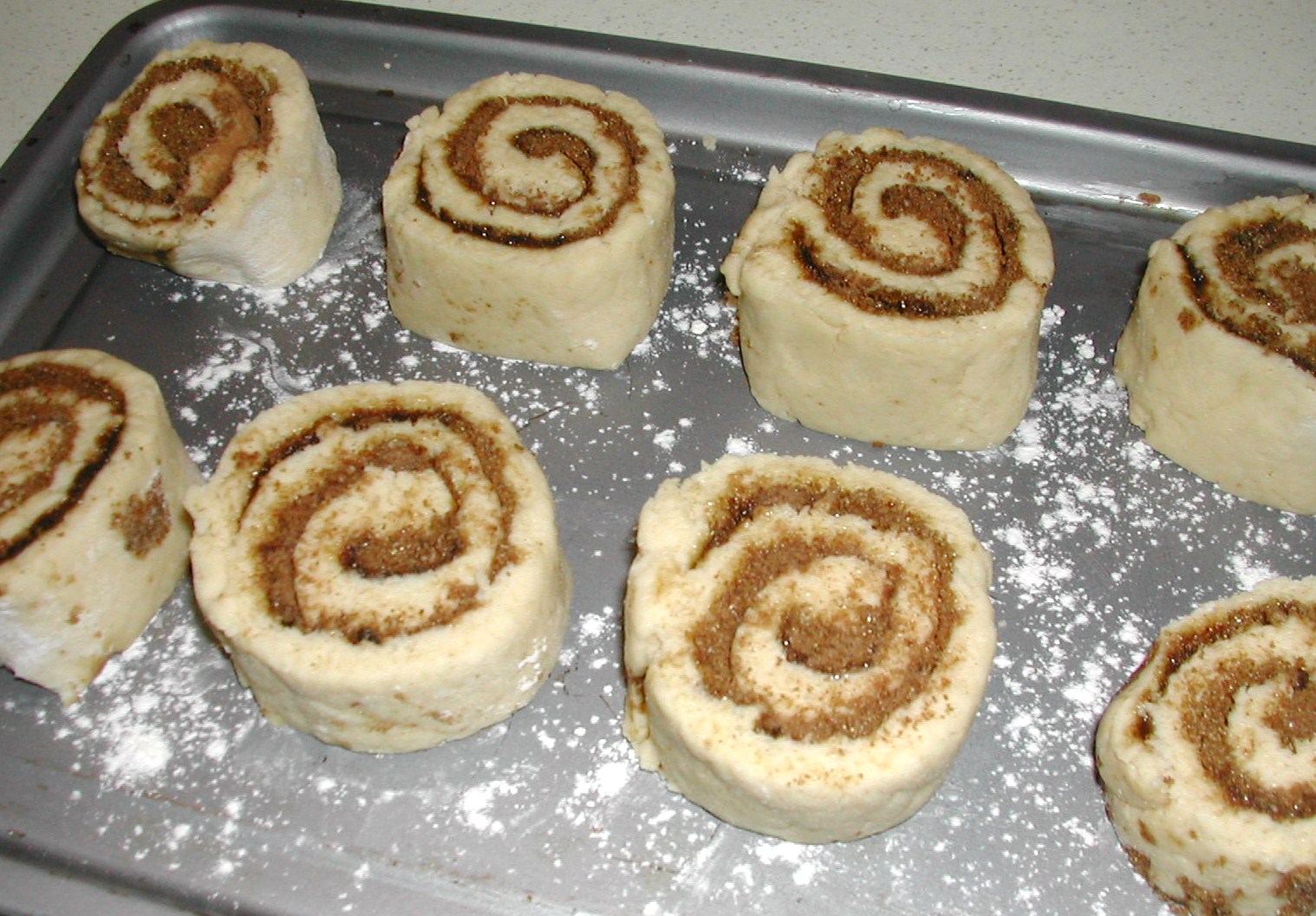 Roll out your dough into a rectangle about 8 inches by 10 inches. Brush the rectangle of dough with milk and sprinkle on a layer of dark brown soft sugar, then sprinkle on a generous layer of ground cinnamon. Roll up the dough from the narrow end just as you would a swiss roll and seal the end with milk. Cut the roll into 8 slices, put them on a very well greased and floured baking tray and brush them with milk, they should at this stage look like the scones in the photo above. Bake them in a hot oven (200 deg C) for about approximately 10 minutes until they’re golden brown.

They are best eaten straight from the oven with a knob of butter and a mug of hot tea!
Enjoy ! 🙂

so that was march!

Oooh, these look just delicious! I LOVE cinnamon buns, so I am sure to love cinnamon scones too. I will have to give these ones a go.

Thank you, Vivienne, for your lovely comments in my blog. I am so glad you come for a visit every now and then, and take the time to leave a message. They are truly appreciated.

Ooooh yummy! Those look fantastic Vivienne. I have just got in from work, made a cup of tea and sat down to read my blogs….could you please email me one….?!!! I wish!!
Have a great week,
Love Jane

I must confess that unfortunately cinnamon is a flavour I’m not really very keen on. Though my aunt loves it, so I’ll be passing your recipe on to her – I’m sure she’ll impress all her WI friends :0)
Jill x

Mmmm they look yummy! My elder daughter especially loves cinnamon, so I will make some of these. I love scones and this is a nice variation.Thank you for sharing your recipe with us!
Helen x

You’ve just taken me back thirty years. I used to make these at my Gran’s house. I’ll bookmark this lovely blast from the past – thankyou!

Now I love cinnamon and immediately thought yum when I saw these Vivienne, I’ve been very greedy today. Thanks for sharing the recipe.

Yummy..they look very delicious! I love to try making these..thanks for the recipe.

Hello Vivienne and thank you for letting me know I won your giveaway!! I am so excited as I loved that corsage. Blooming computer playing up, so not getting through to all the blogs, hence the lateness, but thank you so much x

It looks like you have done a good job with recreating the recipe. They look absolutely delicious! x

Looking too good I can almost smell them from here 🙂

I love cinnamon too, and we add to our buns a layer of butter (inside) before rolling and cutting. My mom used to bake them in those paper cupcake molds (bigger ones) not to loose any of that delicious butter 😉

Have a wonderful week, Viv!

Those look goooooodddd!!!! I think I might have to make some now!

Oh yummy! I shall have to try these!

These must be the perfect scones for Autumn – can’t wait to make some for myself.
P xx

Ooohhh I think I’ll give them a try.
Your bags are lovely.

I too visit this restaurant…bargain for £1.85 of pure delight! I’m dying to make them! I’ve been searching the internet and these look the closest yet.