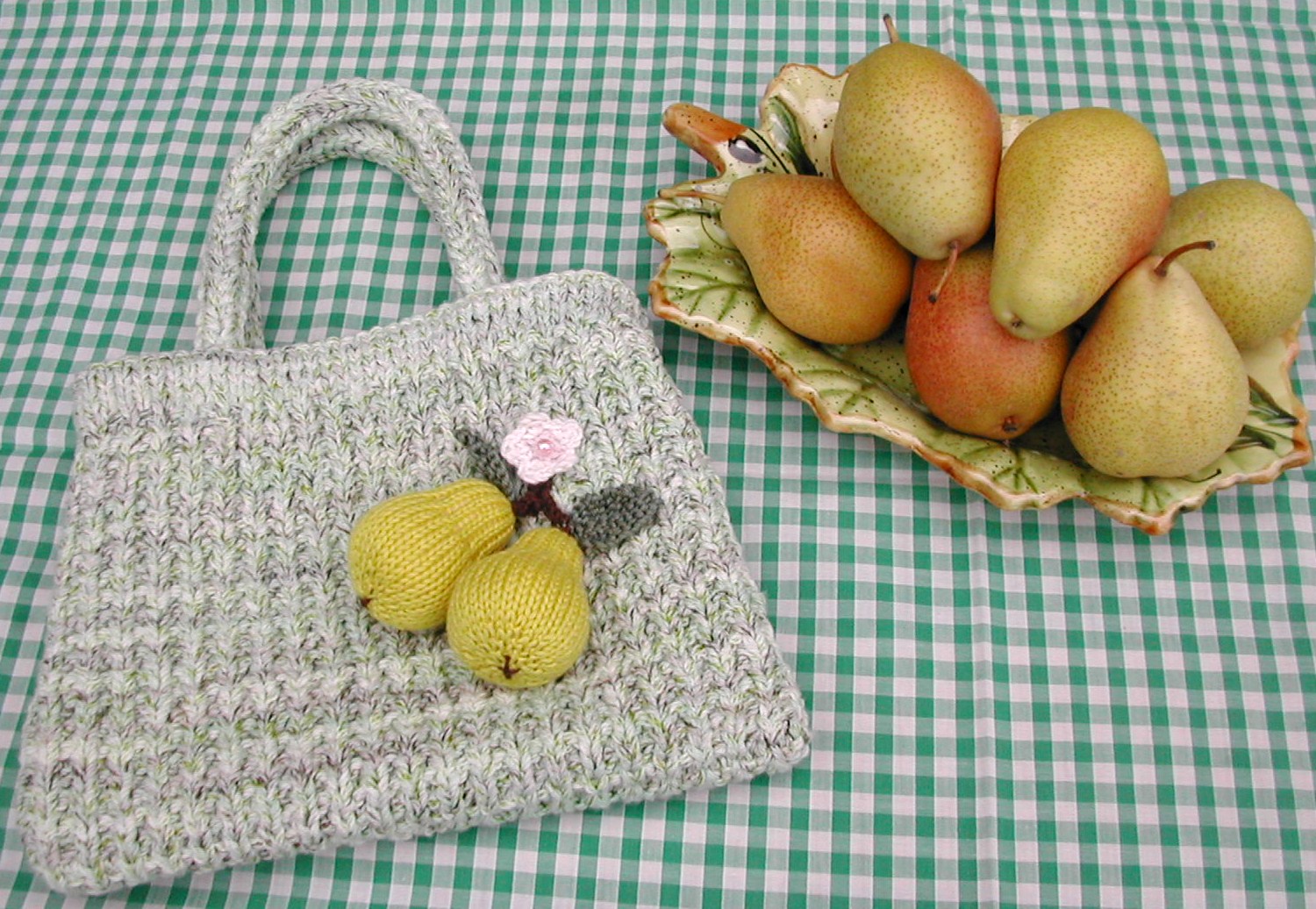 Spurred on by my Strawberry Bag (which now has a new mummy) I had a wee think about what other fruits I could use in my bag making. I was already knitting a green bag and hadn’t yet decided what I was going to decorate it with. Looking at the shade of yarn I was using the first fruit that came into my head were pears! 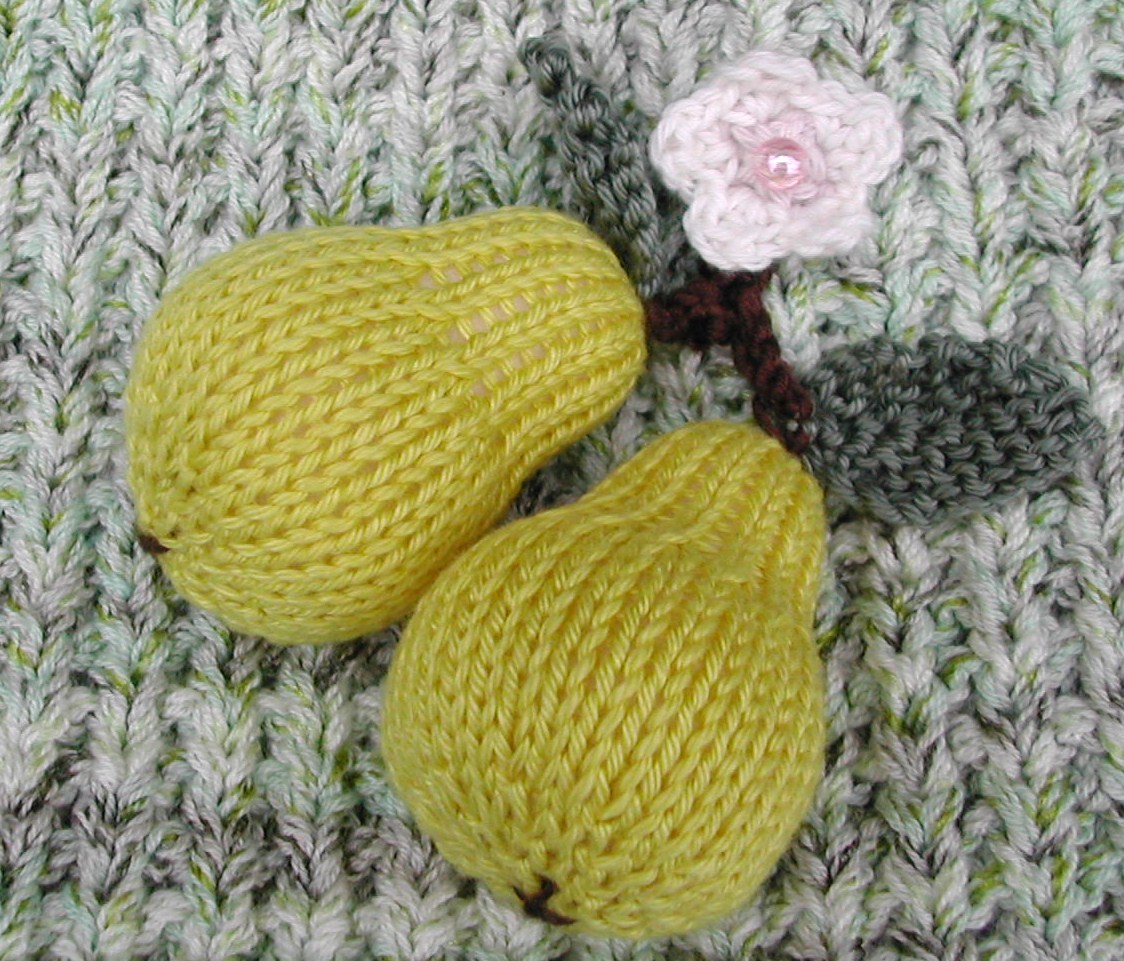 So I had a little play around with some nice yellow cotton and ended up with some pears, which I have to admit I was quite thrilled with. However I was a bit worried how they would look as they were a bit bigger than most of the other things I have put on my bags. So I attached them and they seemed to ‘sit’ ok. I then added a little bit of pear blossom, artistic license I know, as the blossom and the pear are never on the tree at the same time but it did finish it off.

Next I chose some fabric for the lining that tied in with the colours and this is the finished result! 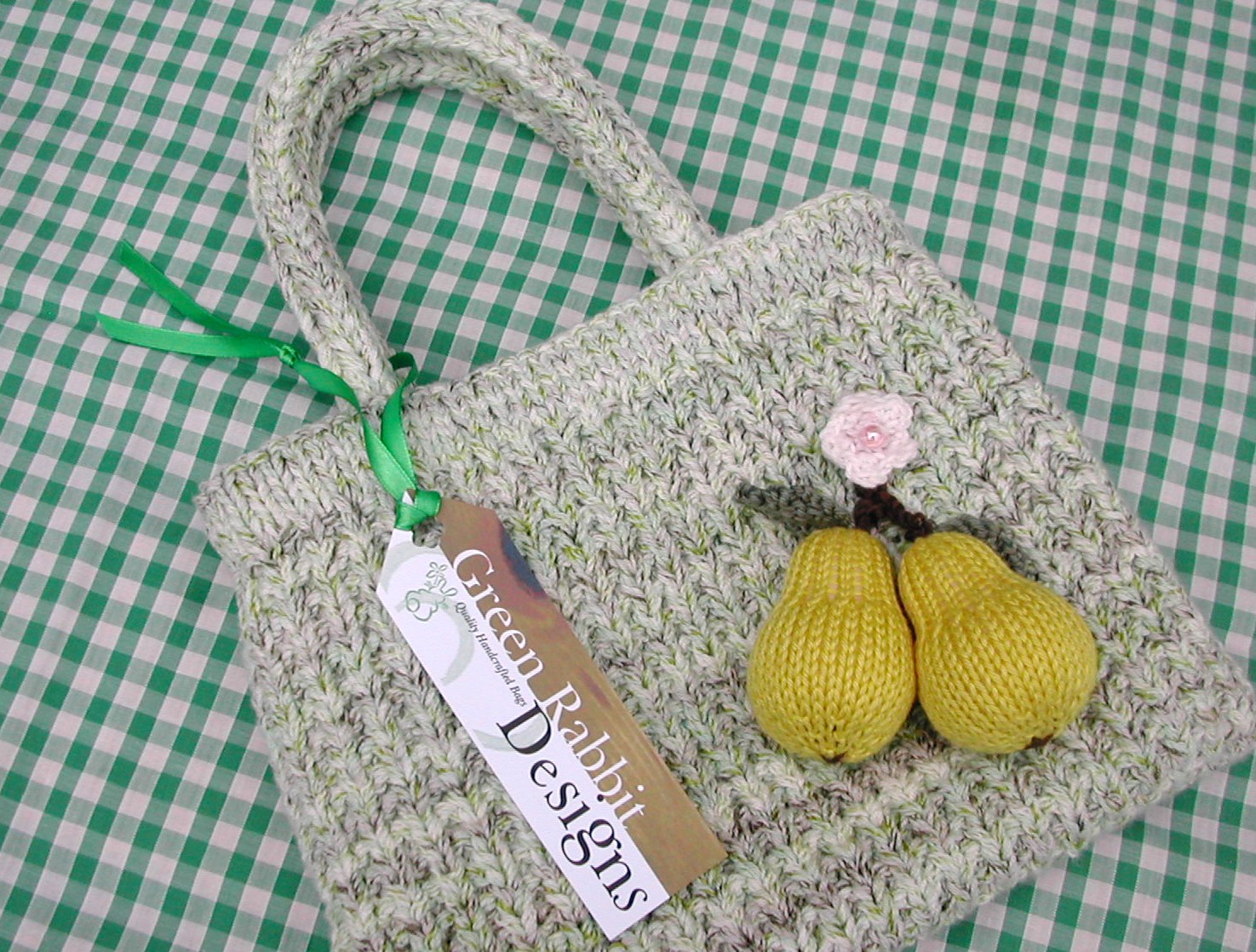 It’s off to Balldougan Pottery tomorrow and hopefully it will find a new mummy too!

I really like this bag, maybe even a little more than the strawberry one (which I didn’t think possible), will you be making even more styles? I do hope so, they are such fun!

Thanks Beth!
I find myself thinking ‘now what other fruit could I use’ and I have come up with a few. It’s unbelievably great fun knitting fruit I have to say! Is that sad? 🙂 lol
Vivienne x

That pear looks good enough to eat! The lining of the bag really sets it off. Lovely! Penny x

I love this bag!!!! I have a pear tree in my yard and the pears look just like the ones on the bag. What is even better is the little pocket you put in the bag! Great work

Thanks Amanda! I would love to have a pear tree in the back garden. 🙂
Vivienne x

I like this bag and the lining is fabulous…just the right touch…pears are nice and my favorite color…no they’re not too big
I don’t think I’ve made my way to your blog before…(via Cosy Living)..glad I did.
So many talented people.out there and I found one more..I love it.

Thank you Barbara for your lovely comment and for visiting my blog!
I hope you’ll call again. 🙂
Vivienne x

That is one seriously cute bag, and as Beth said earlier, this is (maybe) even cuter than the strawberry one…No…Is…No, they´re equally wonderful both! I admire your skills SO. I just ordered myself a new craft book with not only knitting ideas but crocheting too. I´ll be at least eyeing those out 🙂

Happy and creative weekend from ever so hot Finland!

Thanks Mia!!
You’ll have to get crocheting, you’re a great knitter you’ll be able to do it, no problems!
Have a lovely weekend. 🙂
Vivienne x

What a lovely and “delicious” bag you made, it just looks perfect! Groeten, Corry

Thank you Corry, it’s lovely to hear from you again! 🙂
Vivienne x

My favourite designs are when they’re a bit too big. I love the pears Vivienne. Isn’t it lovely when you have ideas buzzing around. Not so good when they won’t come – enjoy your fruit makings.

Thank you Lisa! The big problem is that my hands won’t work as quick as my head! 🙂
Vivienne x

Thank you Vanessa! Wasn’t sure how they would look but I’m happy how it all turned out.
Vivienne x

Oh! Just perfectly gorgeous! I’ve just been peeping at the strawb one too. They’re wonderful x

Thank you Emma for your lovely comment! 🙂
Vivienne x

You are just too clever for words Vivienne! They look good enough to eat! I wonder who the happy new mummy of the strawberry bag is? Perhaps you will become a regular market gardener :0)
So inspiring!
blessings, Val

Thanks Val! A knitting market gardener, now that would be different! 🙂
Vivienne x

Lovely bag. Thank you for your comment. Can I ask you about the chair? Do you think the legs would have been originally longer. My husband thinks so but I am not so sure. It would be great if you could remember. Yes, it does have a secret store bit under the seat and it was very clean.

Hi Zoe, thanks for your comment!
Chair legs are exactly as I remember them, I have emailed you to explain.
Vivienne 🙂