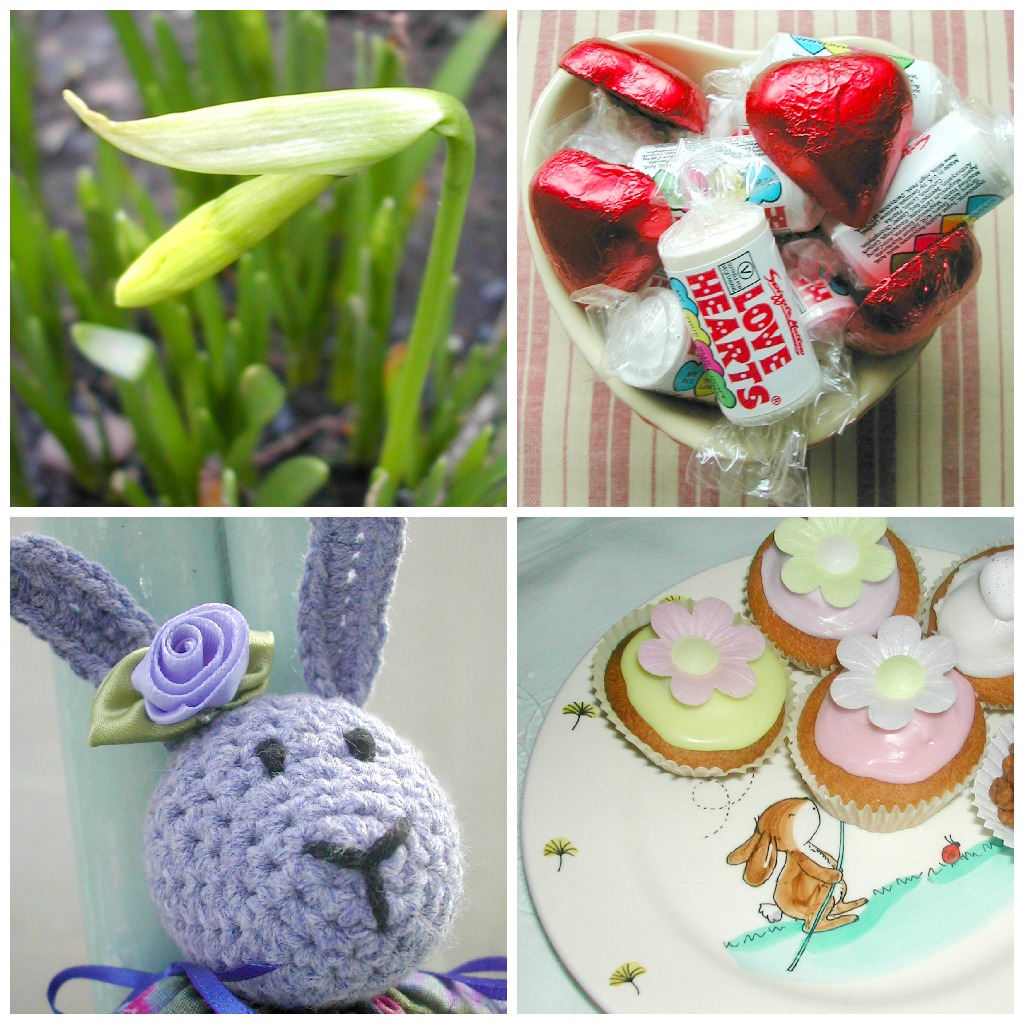 It was so hard to choose just one photo to represent each month of 2012 as I have uploaded so many during the year! I have tried to cover everything that this little blog is about as well as representing the year that was 2012.

As you know I believe it’s never too early to look for spring and I began the year doing just that, February brought Valentines Day and all it’s sweet treats!!
During March, while playing about with yarn and a crochet hook, I made a rabbit, her name was Lavender Rose, well wasn’t she the start of something, many, many more bunnies followed.
April brought us Easter, my very favourite time of year, bunnies and chocolate, who could ask for more! 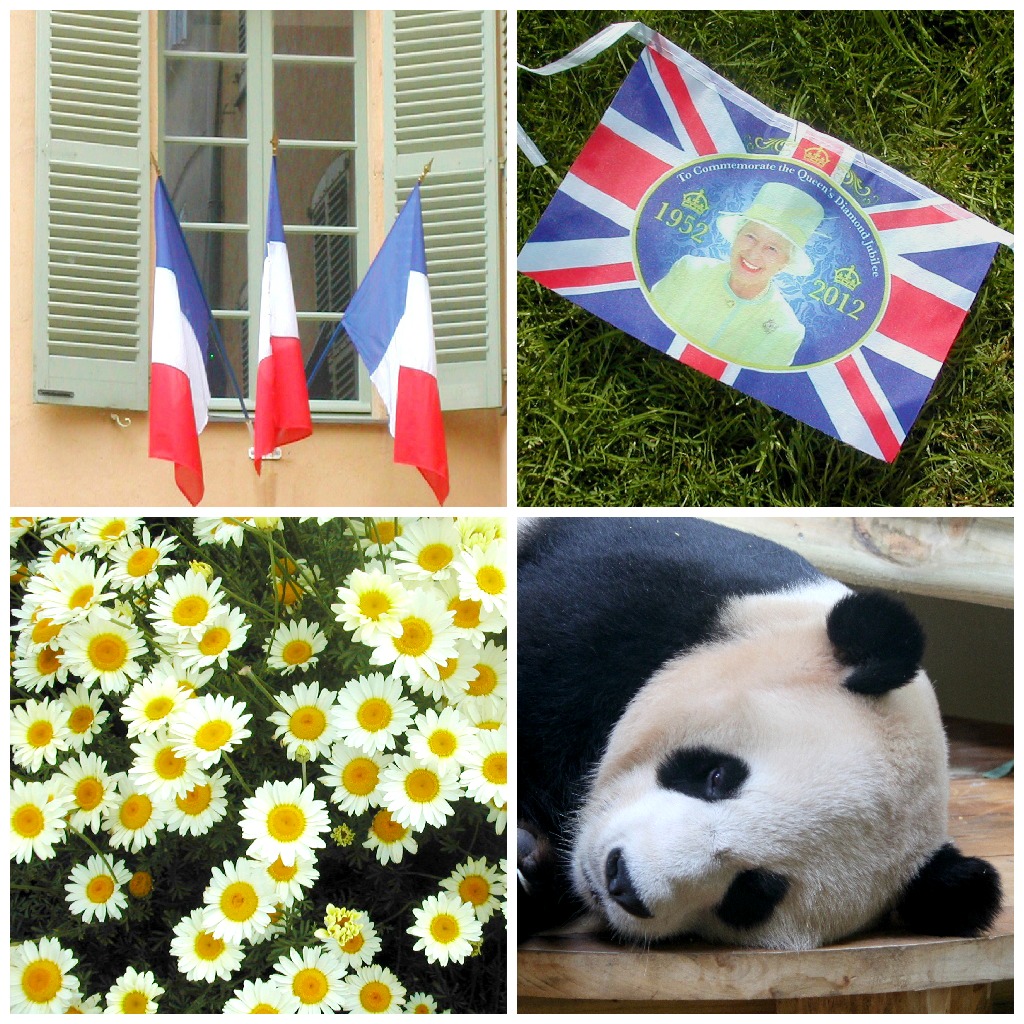 May time is France time and we enjoyed a wonderful holiday in the south of France, while June brought us the Diamond Jubilee in all it’s red, white and blue glory!!
July was spent mostly in the garden and despite some unseasonal weather, flowers bloomed. From the end of July through to mid August we enjoyed the wonderful 2012 London Olympics and at the end of August we had a mini break to Edinburgh where I managed to tick something off my bucket list, seeing a panda in the flesh!! 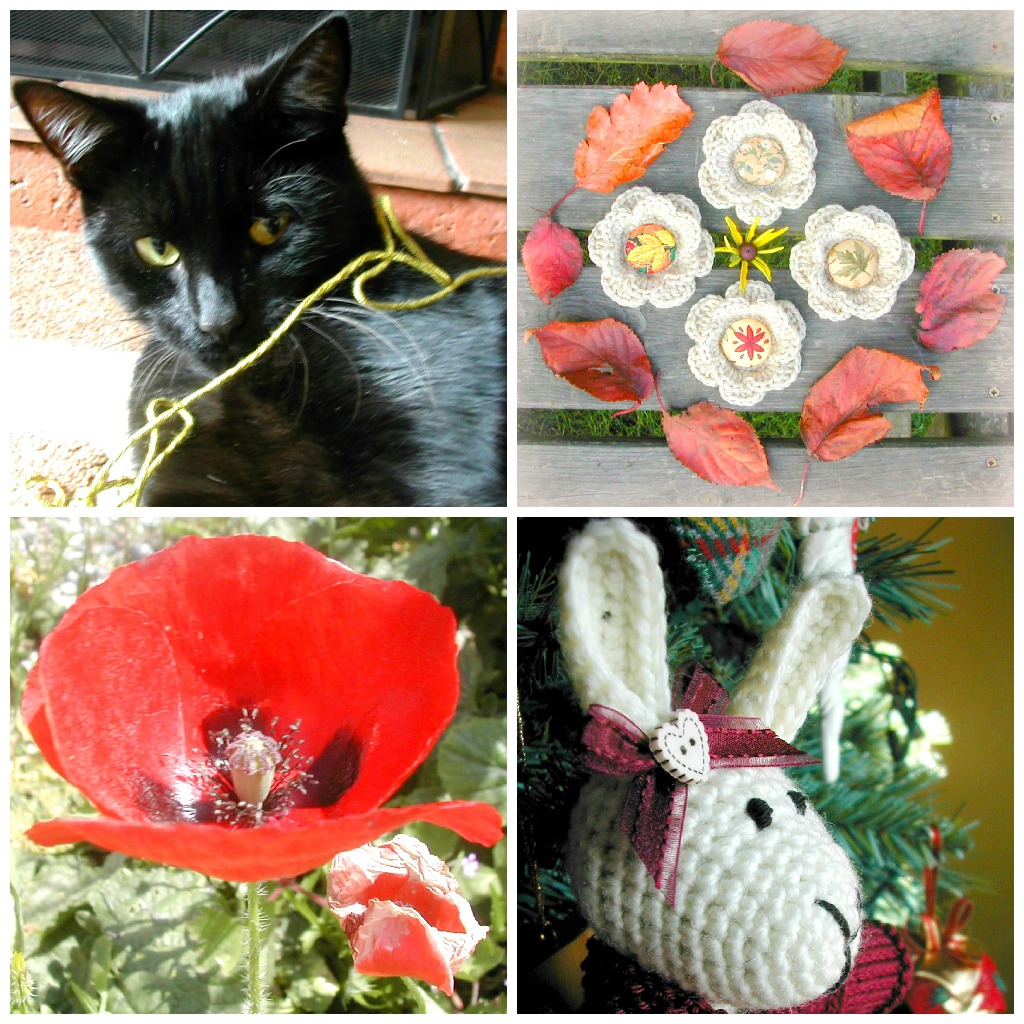 Now of course the cats featured many times on my blog throughout the year, this particular photo is of Charlie helping me with my crochet in September. October brought autumn time and autumn crafting.
November as always makes us stop and remember the sacrifice of others.
Then quick as a flash we were in December, where I seemed to spend most of the month crocheting Christmas bunnies!

So here we are at the end of the what has seemed to me the fastest year ever! Generally it has been a good year and we have had lots of enjoyable times. Bunnies always feature on my blog but this year they featured strongly, I have had so much fun making them and thank you for all your encouragement and support. Thank you all so much for being with me during 2012, thanks for your visits, your lovely comments and your friendship, the blogging community is a wonderful thing and I’m so happy to be a part of it.

So a new year beckons and for us personally I expect the first six months are going to be a very busy time as we have our daughter’s wedding in July. I fully intend to keep on making bunnies and hopefully there’ll be lots more cats, flowers, gardening and outings in this little space too. I do hope you’ll join me and if I could ask one thing of 2013, it would be, please go a bit slower than 2012!!

All that remains is for me to wish you all a very happy, healthy, peaceful and wonderful new year!!! 🙂

The Story Of Rosebud

What a beautiful review, Vivienne, and I must say I knew from the FIRST bunny that you’ll be making manymanymany of them 🙂 They’re just so you and…perfect.
I wish you a wonderful New Year, and tomorrow is the first day of the Pre-Spring in your calendar, and I am so following it too! You’ll have the loveliest time planning and making THE wedding happen, and we all on this side of the screen wish you share some of it with us too! Weddings…ah…

If this is not the longest comment left today I’m stunned 🙂 but it’s just me babbling, dear, and I am so happy to see yet an another year with you! Here’s to 2013!

Vivienne, what a lovely year! Wishing you much Happiness in 2013 with all the BIG happenings! So excited for you.
Much love to my friend, xoRobin❤

What a wonderful rabbit and cat filled review Vivienne, so many lovely memories. I agree that the year just flashed by. How exciting to nearly be in the “Wedding” year, I am so looking forward to sharing this via our blogging world. Cheers to you my dear friend, every happiness for 2013.
Jane x

What a sweet review of your year Vivienne, a rather lovely year too by the look of the pictures. But it does sound like 2013 could be even better with a such a special wedding coming up. Here’s wishing you a lovely year with a slower pace so you can savour every moment before it whizzes by – and may time go especially slowly on that special day in July x

What a lovely review of the year. Best wishes to you too Vivienne.

The year of the Rabbit! What a fruitful year you’ve had Vivienne, I’ve loved sharing it with you and look forward to what 2013 brings! Enjoy the celebrations.
Kate xxxx

Happy New Year Vivienne! It has been lovely looking back over the past 12 months with you. Let’s hope that 2013 is a year of good health and good fortune. x

Thank you so much, Vivienne for all these lovely reminders of 2012!!
Your blog is inspiring. Happiest New Year!! Happy creating and blogging,

Wonderful year’s review, Vivienne! And what an exciting year you have coming up too 🙂 Wishing you a wonderful time in 2013…Happy New Year!
Helen x

Happy New Year lovely Vivienne!…It has been such a treat to visit you throughout 2012 and I’m so looking forward to doing the same this year…Wishing you a wonderful 2013!
Susan x

Do you sell your patterns to make your wonderful bunnies and their adorable outfits?

What a beautiful year in pictures. Happy new year to you too Vivienne!
love jooles x

A lovely reminder of some of the eye candy you have shared with us in 2012.
I enjoyed each and every one of my visits to your blog and look forward to another year of beautiful pictures.
Happy New Year Vivienne!
x

Happy happy New Year to you, Vivienne! Love seeing many familiar scenes in your year in review. It sounds like 2013 is going to be quite exciting and I doubt it will be any bit slower. BUT….we can hope and dream and decide to live each day with purpose and gratitude – which is what I believe people who take photos and notes and share on a blog do! Looking forward to your new posts in 2013, and I thank YOU for being such a faithful friend this past year! xo Karen

Love the review – the blooms and especially those super rabbits! xx

Happy New Year. What a year Vivienne, they do seem to be going faster each 365 days that pass! Lovely to look back at your piccies and here’s to a wonderful 2013 with all the excitement it has in store for you.
Sally x