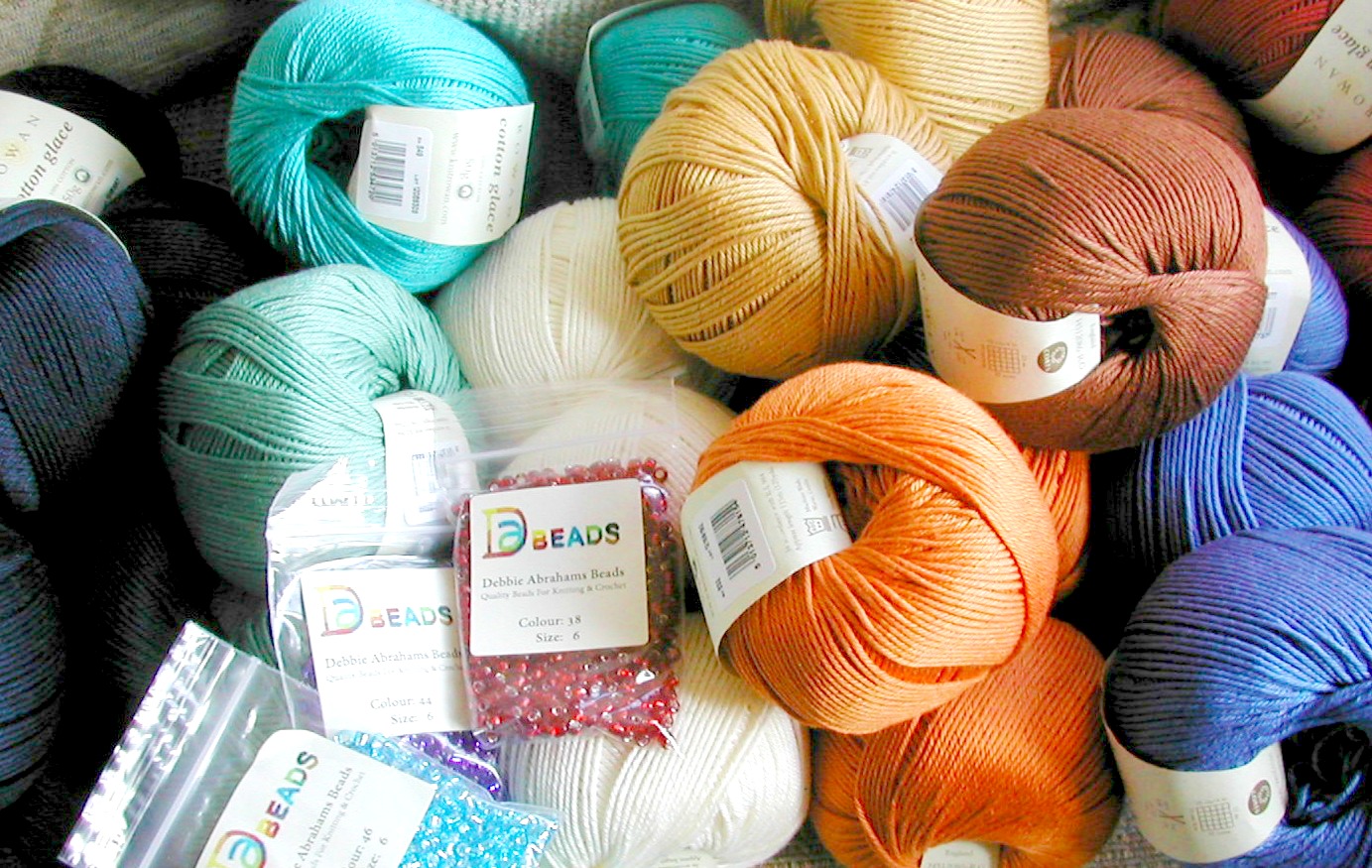 It used to be I never won anything, not a thing no matter how many competitions or giveaways I entered it was always someone else who was the lucky one.

Lately though this seems to have changed as I have been so lucky to win so many lovely things. 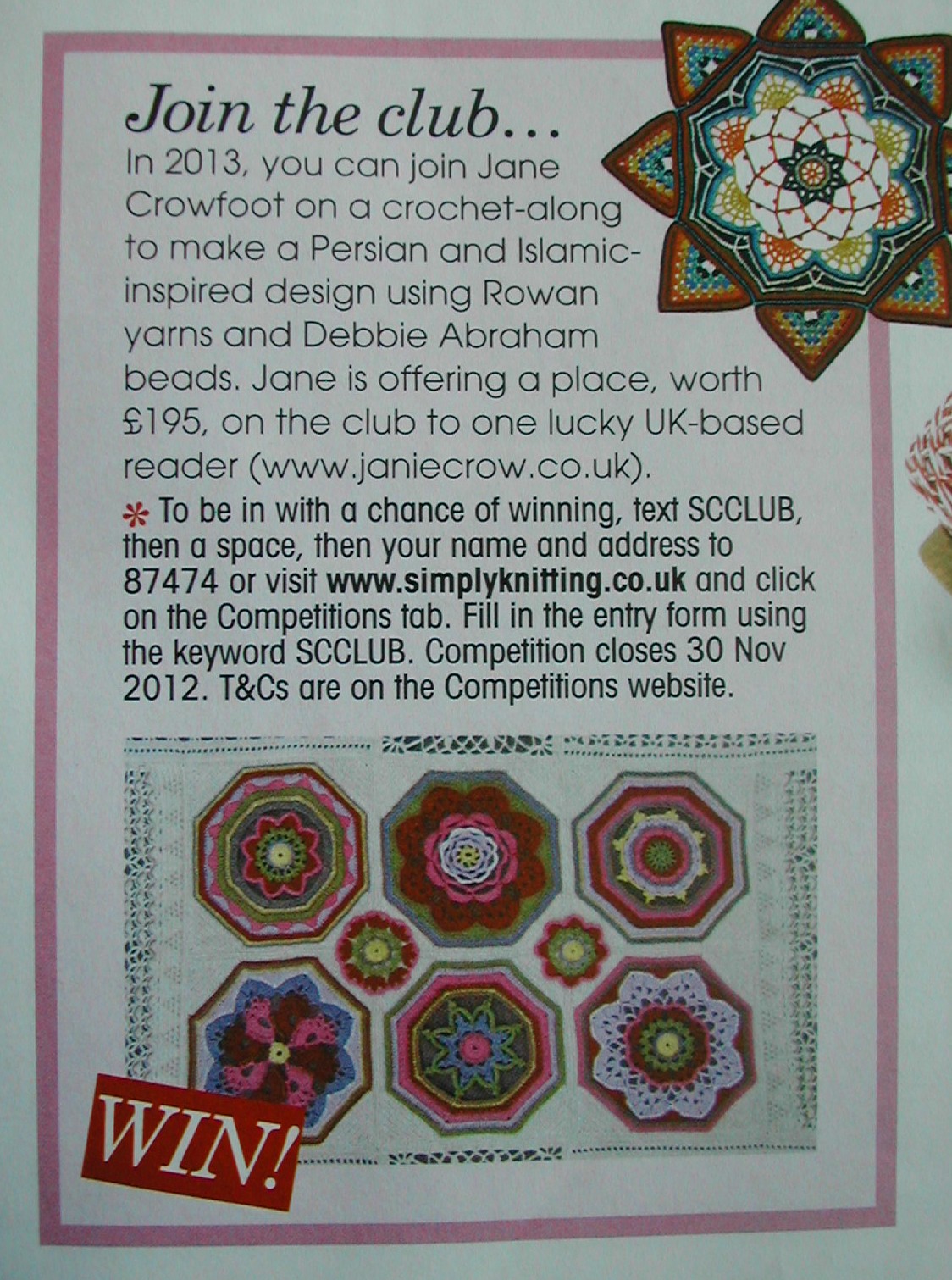 Last month I received an email from Jane Crowfoot letting me know that I had won the above competition which I had entered at the end of last year in Simply Crochet magazine.

I had forgotton all about entering but I was absolutely thrilled to win such a brilliant prize, worth £195!!! 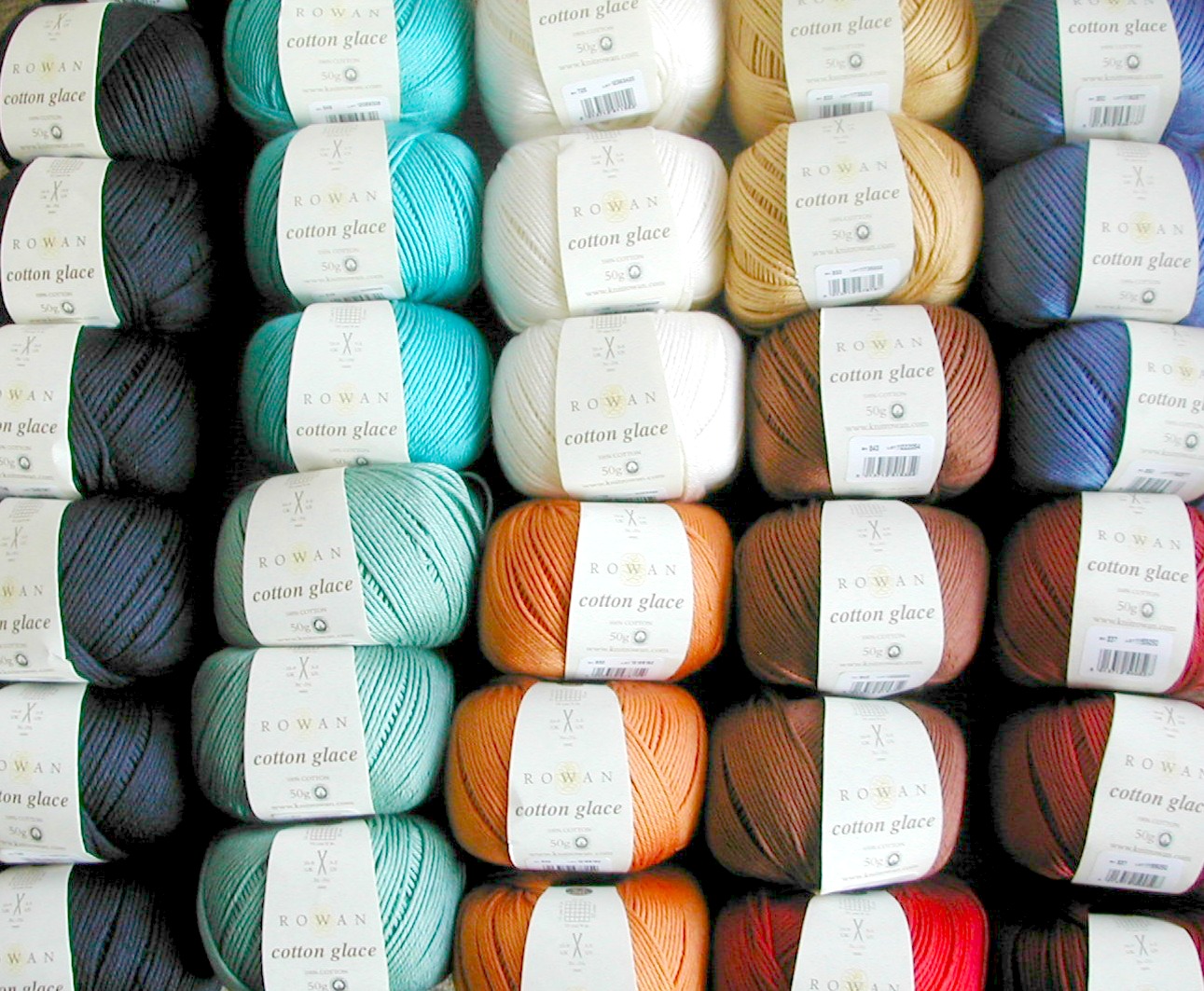 Just as my daughter was leaving the house one morning last week she shouted in “Mum I have just signed for a parcel for you from the postman”. It was quite a heavy box and I couldn’t think what it was I had ordered, nothing came to mind. My daughter delayed her departure as she was just as curious to see what it was too.

When the box was opened this wonderful array of yarn was revealed. Thirty one balls of Rowan Cotton Glacé, a yarn I love, in colours which could have been picked for me personally!

There is something so wonderful about this much colourful yarn all in the one place. Breathtaking actually! 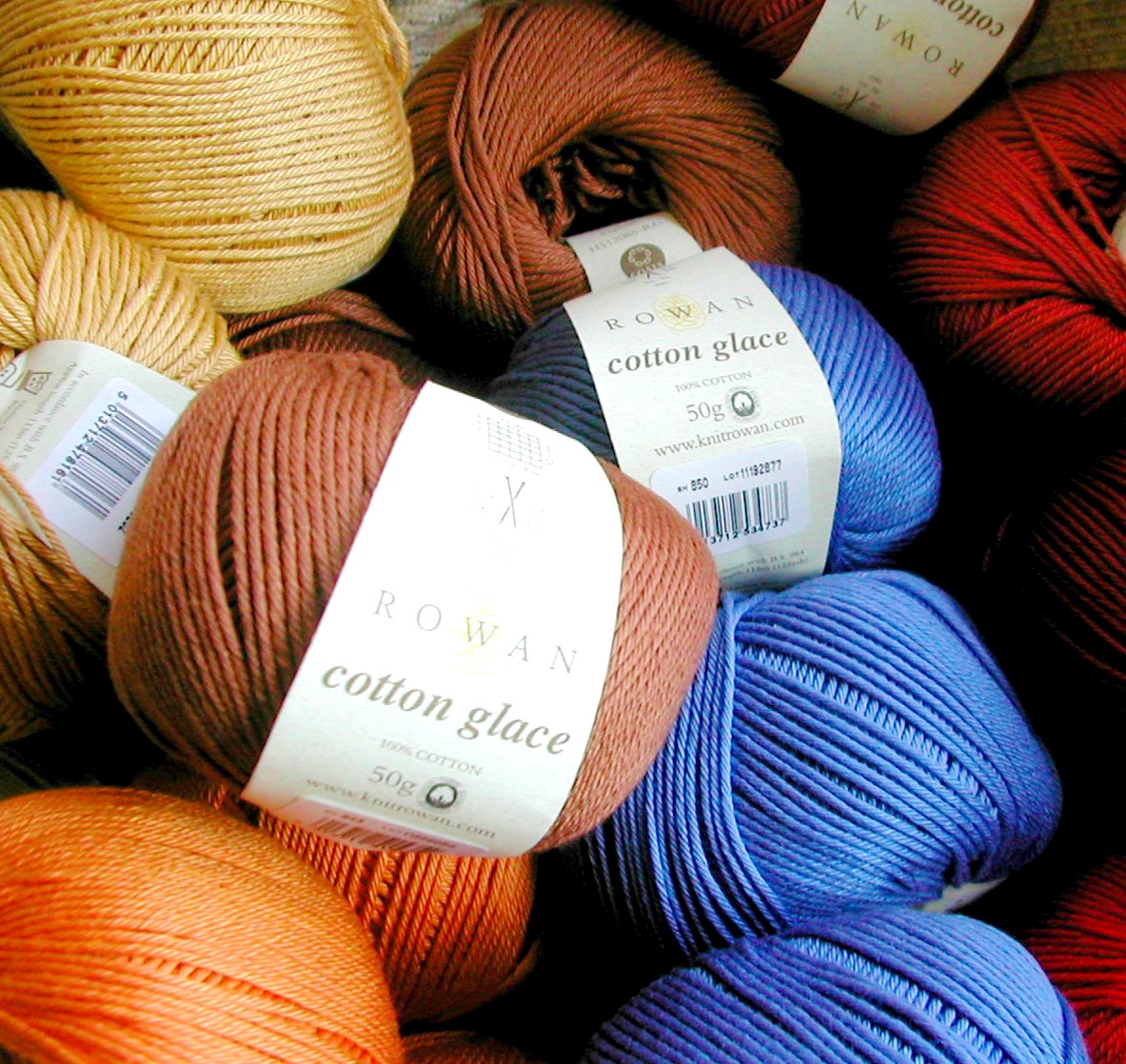 As it is a crochet-along I’m not sure exactly what it is I’m making yet. I do know that it is a Persian and Islamic inspired design hence the wonderful yarn colours. I receive my first set of patterns by email next week and then once a month until July, so looking forward to that. 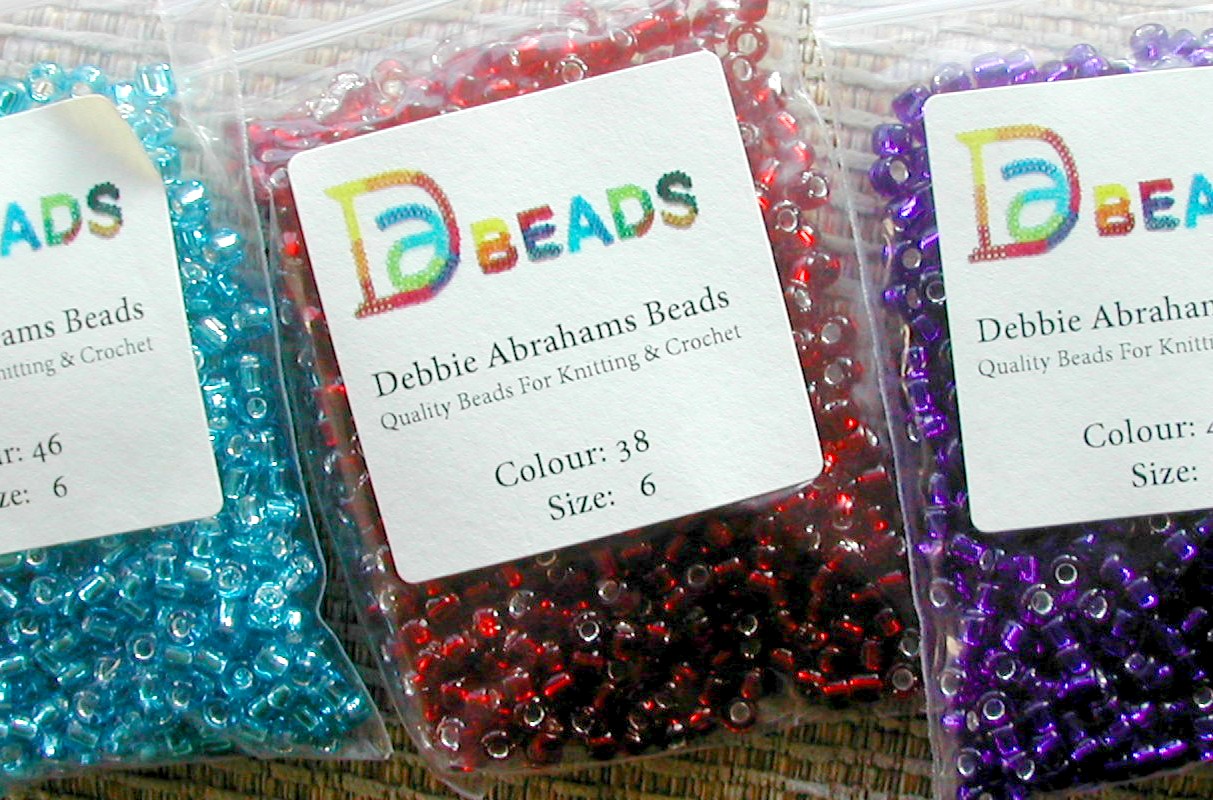 I also know that it involves beading as these three packets of gorgeous Debbie Abraham Beads arrived with the delicious yarn. 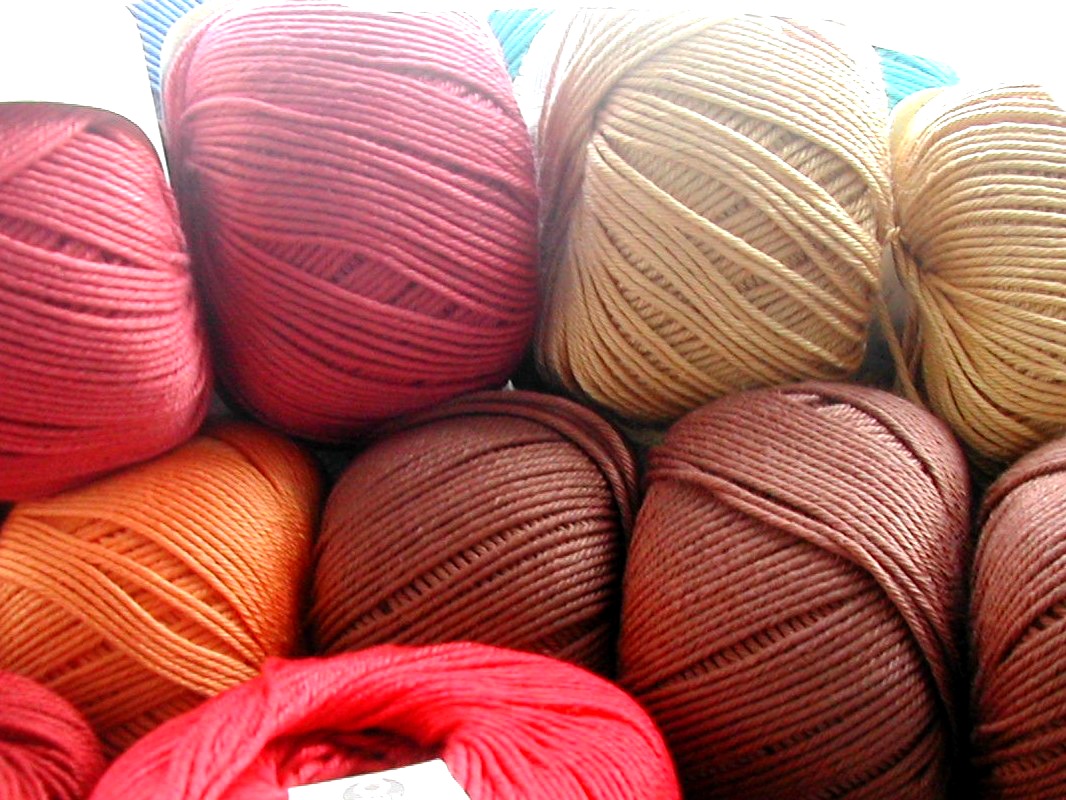 So haven’t I been a lucky girl!! I just hope I can do the project justice and most importantly keep up with it.

My home is upside down at the moment as we are about to get a new kitchen fitted! I am so looking forward to my new kitchen, just not the upheaval that will go with it. Everything that lives in the kitchen is now distributed throughout the rest of the house. It’s a nightmare and from tomorrow onwards for a week or more I’m going to have ‘men’ in my home, don’t you just hate it when you have ‘men’ in your home!!!

I think I may just retire to my bedroom with my crochet!

Happy Tuesday, we have sun again! 🙂

What a super parcel of yarn… lucky you. I sympathise about having “men in”. I absolutely hate it.

How wonderful Vivienne!! I am so pleased for you, enjoy it xx

you must be feeling so excited – i love cotton glace too. i have just finished a granny square blanket using this year. what do you plan to do with this cache?
anniex

Congrats! That yarn is lovely. Can’t wait to see the project as you work on it. We have “men” in our home right now too — as much as you like it all getting gone there is this unsettling feeling.

Wow Vivienne you might not have had much luck at winning until recently but you certainly hit the jackpot with this wonderful prize.
It is well deserved and I’m really looking forward to seeing what will become of those yummy balls of yarn.

That is just wonderful win as you put it – all that yarn looks absolutely breathtaking! Lucky you! And congrats on your new kitchen, and you know, I sympathize your situation 😉 I KNOW what it feels to have men in house… *sigh* But it will so be worth it, I can’t wait to see your new kitchen!

wow how exciting. Cant wait to see what you make.

Lucky, lucky you! And my favourite yarn too! Am so very pleased for you Vivienne and can’t wait to see it being made up into something beautiful,
P xx

Oh wow Vivienne, what amazing wins. You lucky girl just think of how many things you can make with all that yarn. I can see a whole warren of rabbits coming to life ;0) I don’t envy you with the men in the house but just think in a week or so’s time you will have a wonderful new kitchen all ready for the spring. Happy Tuesday, it’s been a glorious sunny day here today..hoorah! Jane x

How exciting to win such a faulous prize, Vivienne! The yarn is absolutely gorgeous and I know you will make lovely things with it! You have my sympathy at having ‘the men’ in the house…but soon it will be over and so worth it for a lovely new kitchen! And at least being busy crafting does take you mind off their pesky presence!
Helen x

Well done, what an amazing prize to win. I’ll look forward to watching your progress on it. I’m a beginner to crochet but I love seeing Jane Crowfoot’s work.

Oh – congratulations, you lucky thing! I can’t wait to see what you come up with. Such a lovely, huge stash! x

Vivienne I am so pleased for you! It could not have gone to a more worthy winner and I am sure you will do the yarn justice whatever you make. (Shame you just couldn’t just knit bunny cardies with it)! I think you are right to retire to the bedroom with your crochet when the workmen start, just don’t let them follow you in!!! x

Congratulations Vivienne!…My goodness, this is such a fabulous prize and you’re going to have so much fun!…I hope all goes well with your new kitchen…it will be fabulous when it’s finished…just hold that thought!
Susan x

What a wonderful win, indeed!! Congrats Vivienne. I can’t wait to see some geometric crochet from your handy crochet hooks.

How exciting to hear about a new kitchen. I hope your workers will be done soon. Hoping you have spring-like weather.

Hi Vivienne, well done you, what a brilliant prize and such a joy for an avid crocheter like yourself. It’s like a box of sweets all those colours, lovely.
I’m with you on hating having anyone in the house to do work, at least it’s your house and you’ve chosen to have something nice done, believe me how ten times worse it is in a rented house when you are told and not asked someone will be coming in to do something. I can tell the mess is driving you crazy, I also hate having to let workmen use ‘the facilities’. I’m sure the time will pass quickly if you have your hooks and wool out. Good luck!! x

What an absolutely wonderful win 🙂

My totally sympathies re. the mess … we are in chaos here today, though I’ve no idea how one small studio refit comes to disrupt an entire household

Wow Vivienne, that it a super prize – I am drooling over that shot of the beautiful yarn. Hope your new kitchen fitting goes smoothly – I’m looking forward to seeing pictures!